Trump’s administration has recently proposed lifting a ban on the import of elephants killed as sport trophies. Suddenly, endangered species have become a major political issue. As of this writing, Trump had issued a policy reversal by Tweet. The full effect of Trump’s tweet is not yet clear. There seems to be confusion about whether the things Trump does on Twitter are “really happening” or not.

Trump’s sudden concern for elephants is inconsistent with his documented history of cruelty to animals. As elephants faced extinction in 1989, Trump was using their hides to coat the walls and floors of rooms in his properties. Trump’s sons have controversially engaged in the sport-hunting of endangered African species, including elephants. One of Trump’s Russian business associates once pled guilty to smuggling endangered animal carcasses into the United States. The prosecutor who approved the plea deal is now a member of Trump’s Cabinet.

Trump is scheduled to pardon a Thanksgiving turkey later this week, which may be his first documented act of mercy towards an animal. In over a year of full-time research, I haven’t yet found an instance of Trump showing kindness or empathy toward an animal (the kind treatment of people has been pretty rare also).  I have come across deeply troubling anecdotes, though.

Of course… Trump is accused of maiming a racehorse:https://t.co/1Rah6awh2B

I first discovered allegations of Trump using elephant-hide wall coverings in a letter to the editor of the Miami Herald from June of 1989. The reader had written in to express indignation at a television news segment that had casually featured “elephant hides used as wall-coverings” in the lobby of Trump Tower. I’m still working to verify that claim and find the original source.

Yeah. I spotted this old letter to the editor (6/4/89) which made me try to verify it. Did he have elephant-hide walls in Trump Tower? pic.twitter.com/MrViAA56ss

Confirmation of Trump’s use of elephant-hides for interior decor can be found in a 1989 Miami Herald article about visitors regaled by a trip to Trump’s yacht.  The article noted that “even the richest of millionaires was impressed by the elephant-skin ceiling in the movie theater” aboard the yacht. At the time Trump was cladding his walls with their hides, the population of African elephants was plunging dramatically. To stem the mass slaughter of elephants, the United States banned the import of elephant parts in 1990.

Some context: US banned importing elephant parts in 1990, declared endangered in 1976. So it was awful, not illegalhttps://t.co/9AkWeEVNJ8 pic.twitter.com/NJE7icqEhr

While I have not yet “strongly verified” claims of Trump coating his walls in elephant hides, I soon found more recent (and widely known) photographs of Trump’s sons killing various endangered African animals (elephants included) for sport. (Gothamist, March 13, 2012) 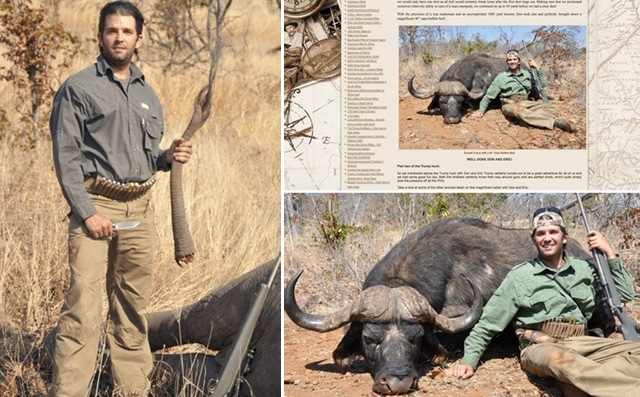 Exposure of the photographs prompted Trump to publicly defend his sons, noting they’re hunters and donate the meat of the animals they kill to  “the local tribes.”

It’s unclear to me where this tribe of African villagers subsisting off the donated kills of wealthy safari hunters lives.  If you spend too long listening to Trump, even the most outlandish things begin to seem plausible, so please take a few moments to wrap your head around the staggering implausibility of the Trumps’ official defense of their conduct. Slaughtering cheetahs for sport would be a convoluted approach to the policy problem of rural hunger in Africa. Nearly any child between the ages of 7 and 10 could explain quite clearly why hunting big-game cats for meat is wrong. 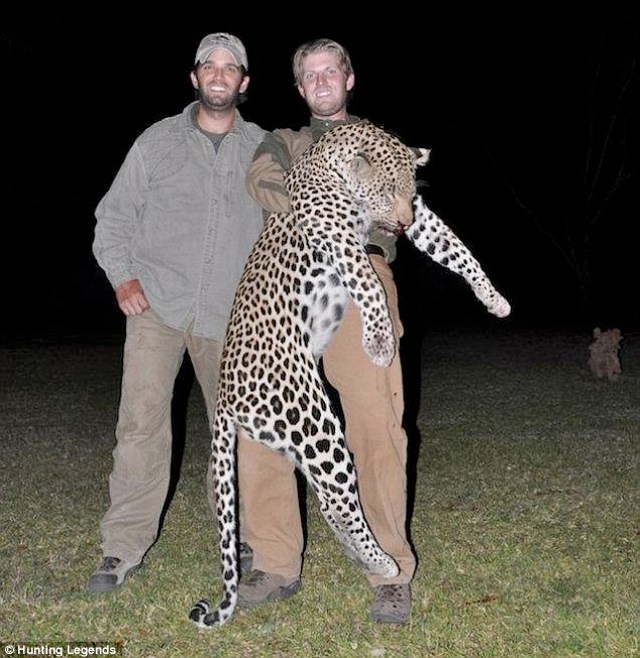 Doing Business with a Smuggler of Endangered Animal Carcasses

Craziest of all, however, is that the international trade of endangered animal parts actually ties in directly with Trump’s Russian business associates. Trump once had a business partner named Tamir Sapir (who passed away in 2014). The relationship between Trump and Sapir goes back a long way and is pretty complicated. But to keep it simple, let’s point out that Sapir was a key partner in Trump Soho, a big Trump-branded development in New York City that is controversial. Two of Trump’s children were nearly indicted for their role in the building’s development and their business partners have been credibly accused of money laundering.

During all of the other sketchiness and fraud going on at Trump SoHo, Tamir Sapir was caught with a yacht full of endangered animal carcasses. Officials reportedly discovered “barstools upholstered with python … skins, seven carved elephant tusks, … a zebra-skin-lined children’s bed, and a cigar box wrapped in elephant hide.” The billionaire pled guilty in 2009 and was punished with a fine of $150,000. The prosecutor in Sapir’s case, Alex Acosta, is now Trump’s Secretary of Labor.

That NYC cab driver turned billionaire has pleaded guilty to charges that he violated the Endangered Species Act by attempting to import 29 rare dead animals into the US aboard his yacht. You may recall Tamir Sapir as the Georgian man who rose from immigrant hack to Russian oil and real estate tycoon, ultimately buying the city’s most expensive townhouse across from the Metropolitan Museum for $40 million in 2006. But Florida Customs officers who peered inside his yacht in 2007 know him better as a dealer in dead endangered wildlife.

According to the Post, Fish and Wildlife Service investigators confiscated the following items: Barstools upholstered with python and anaconda skins, seven carved elephant tusks, hides of jaguars, tigers and zebras, a fully stuffed and mounted lion, a cigarette holder made from python skin, a zebra-skin-lined children’s bed, and a cigar box wrapped in elephant hide. Speaking to reporters, US District Attorney Alex Acosta said, “Personally, I think these items are rather creepy items. And I would not want them in my house, but some people like them and are willing to buy them. The reason laws exist is because there is a market.”

So, to recap what we know so far:

(1) Trump doesn’t have a good track record on caring for animals.

(2) Trump has a past history of importing endangered animal parts.

(3) Trump’s sons have gone to Africa to kill endangered animals for sport.

(5) Trump’s Administration has proposed loosening restrictions on the import of endangered animal parts.