Today I found something totally unexpected in a San Diego Courthouse. It’s also totally strange. I’d like to enlist your help explaining what I’ve found. Click here now to see the case file while your eyes are still fresh!

It appears to be a debt collection action by Fred C. Trump that somehow turned into bench warrants and a police manhunt for an elderly couple who owed Trump slightly over $1,000. The entire case is deeply unusual. I’ve never seen anything like it. Several people hanging out with me in the basement of the San Diego Hall of Justice this afternoon agreed it seems most unusual.

Next, pay close attention to the address of his attorney. For a two-bit collection action in San Diego, Trump hires an attorney with an office in Beverly Hills. That’s 100 miles north of San Diego and some of the priciest real estate in America. This doesn’t look like a cheap attorney.

OK, so next Fred Trump’s presumably high-priced attorney asks the court to schedule a hearing about issuing a “writ of execution” against Sam and Betty Tobias. But they don’t come to the hearing. So the judge issues a bench warrant for their arrest. I’ve seen a lot of collection actions in my career. I’ve never seen them pushed this far. 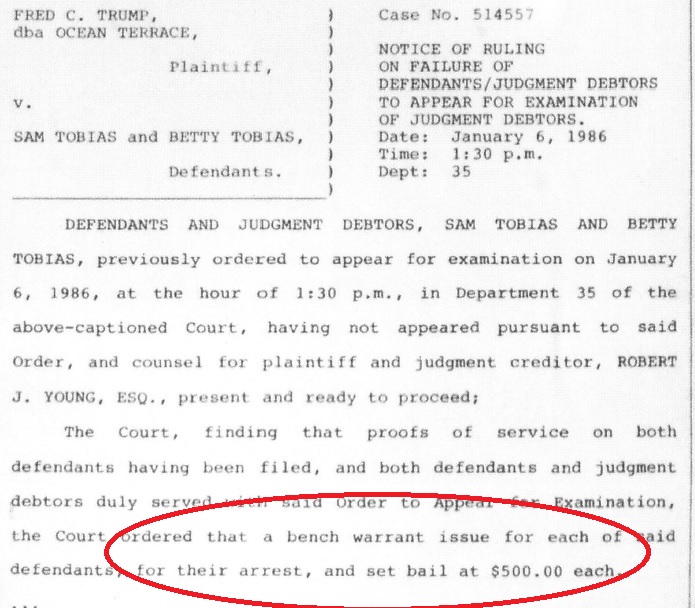 Now take a look at the arrest warrant itself. Police are searching for a 75-year-old retiree with a receding hairline and a 9 year old car. To arrest him (and his wife!) over a $1,300 debt owed to a landlord 3,000 miles away. 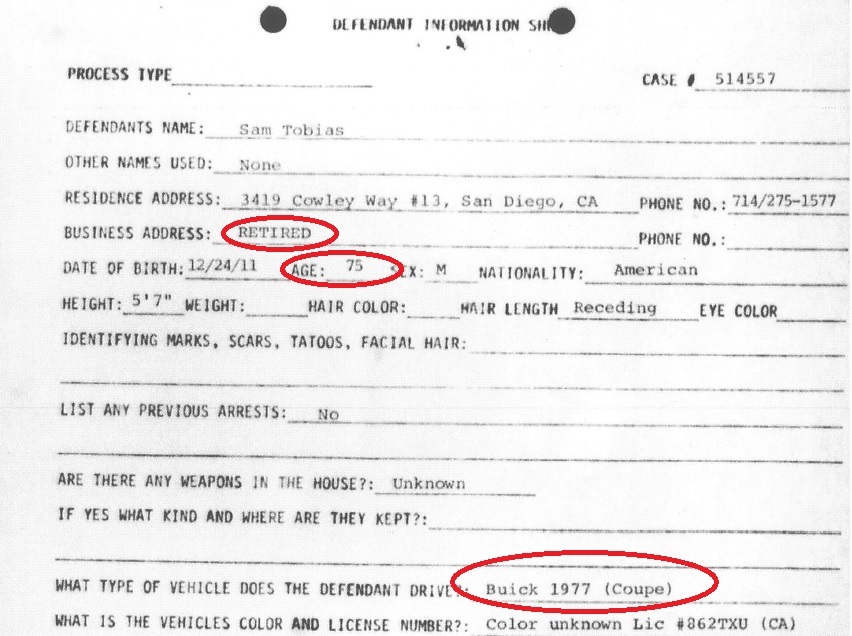 The final filings were barely legible on microfilm (and even less legible after printing and scanning). But they’re an account by the marshal of his unsuccessful efforts to apprehend our fugitives.

This case is one of the dozens of bizarre things you find when you start looking into Trump. Unfortunately, I don’t have enough time or money (yet!) to chase down every lead. I’ve given several of my most promising leads to journalists and I’m working on several by myself.

Would you like to try your hand at running this one down? Can you find evidence that would help to explain Fred C. Trump’s motives for launching such a punitive cross-continental quest for such a small sum of money? If so, please send me an email at ragepath.project@gmail.com explaining your theory and the evidence that supports it. No attachments, please.